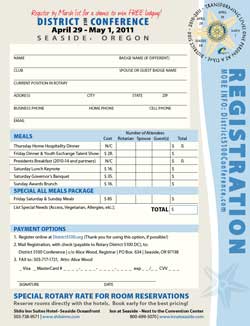 Keith and I are proud members of Rotary International, the world’s largest service organization, and are active in our local club. the Rotary Club of SW Pacific County Peninsula.    Not only does it feel good to make a difference in our community, and our world, it’s a heck of a lot of fun.  Along the way, I’ve gotten to work on a number of posters, flyers and programs for events like Oysters & Art, and Christmas Angels.  I’ve also had fun designing a club logo, website, pin and handbook.

Last year, I had the privilege of working with the Rotary Club of Seaside on their club pin and we’re working on a new website for them now.

In fact, getting involved in Rotary at the District level was something I really enjoyed as I got to meet, and work with, a lot of passionate people and learn more about Rotary and the good it does in the world. We just launched the website for our District Conference coming up in May, this year in Seaside, Oregon.  I was honored when asked to design the logo for the conference and a variety of collateral materials, including the registration form, flyers and swag.

Watch for Rotarians all over the Pacific Northwest on September 11, 2010, as we panhandle for Polio eradication.   While I have your attention, how about a little info on this crippling disease we are SO CLOSE to kicking off the planet?

Why should I care about Polio? I live in a certified Polio-free country. 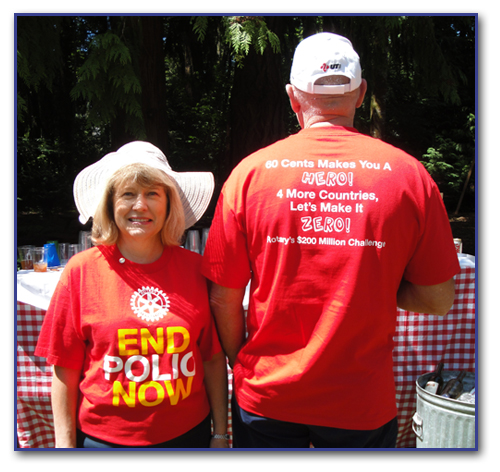 How is it spread?
The route of infection is people to people contact. The virus is found in the feces of infected individuals. Hygiene is a factor.

How is it prevented?
The primary prevention method is vaccination. There are two primary types of vaccines, inject-able and oral. Because the route of spread is oral-fecal, the oral vaccine is effective. The cost of the oral vaccine is less, the oral is easier to administer and better accepted so the oral route is preferred in much of the world.

What has this got to do with Rotary?

In 1985, there were 350,000 cases in 125 countries around the world. When it was obvious that the USA was close to eliminating Polio within its borders, Rotarians made a pledge to eradicate this disease. Rotary’s vast network of 1.2 million members have contributed money, volunteer time, and networking expertise to the Polio eradication effort. Rotary’s leadership, beginning in 1985, inspired the World Health Assembly to pass a resolution to eradicate Polio, which paved the way for the formation of the Global Polio Eradication Initiative in 1988.

Interested in reading more, getting involved or making a donation toward this work?  Visit rotary.org/endpolio.